History repeats itself, and where it does not then it often chimes. We watched out for the year end flows in markets which tend to be particularly hostile by the looks of it. Several asset classes witnessed flash crashes on security prices driven by algorithmic machines on the 3rd of January, 2019. The “atomic bomb” of the first trading week of the year. Sleepy Asian traders still holidaying woke up to a rude shock on a sea of red flashes on market screens punctuated by low liquidity levels. In just a pithy seven minutes, the Japanese Yen soared 8 percent against the Australian Dollar, for some, a proxy of the global economy. Versus the Turkish Lira, the Yen surged a whopping 10 percent. Against the greenback, it rallied 4 percent. So what caused this? Apple. What did they do? Well, they blamed their unflattering 2018 fourth quarter losses on the slowing Chinese economy.

Well so far into this new year we have had cases of pumped up volatility, largely driven by geopolitical tensions between US and Iran. Much against the geopolitical chagrin, markets are exhibiting signs of optimism especially in the British Pound, having found bang-on, solid support at the 1.2900 figure handle with bids decaying placed put options. With the noise settled, smart money picked up value for cable longs at 1.2900 aiming for 1.3500, again. We at Mansa-X will be looking to go long on the British Pound but watch out for the speed bumps along the way because Brexit never ends. So do not get surprised if Brexit transition period is extended beyond December 2020! USDJPY suffered its biggest drop, going back to levels last seen in October 2019 as US-Iran tensions curbed investors’ risk appetite. 10yr Treasury yield and the Yen have been having dinner dates in different restaurants, indirectly correlating. The US Dollar took it on the chin and bled out with a horrible end year party price action after the party!

Assuming President Trump is acquitted by the Senate, does he get re-elected in November 2020? This could be the calm before the storming shake-out. Things were eerily calm when they arguably should not be, especially coming into an election year. US equity markets had become complacent going into year end with all the focus on liquidity, stabilizing data, and the trade deal. President Trump announced, albeit on Twitter, that there will be a signing ceremony of the “Phase 1” Trade Deal with China on January 15th at the White House. One would argue that markets are not correctly priced for the political risks lurking in 2020. But when you look at the markets, it is an entirely different picture. As of December 27th, the S&P 500 closed at an all-time high for the 35th time in 2019 and 242nd time this decade. The bull market that began on March 9th, 2009 is now over 3,940 days old. Needs to last about 525 more days to top the longest bull run ever (1987 – 2000). Now, how is that for the end of a cogent bull run! 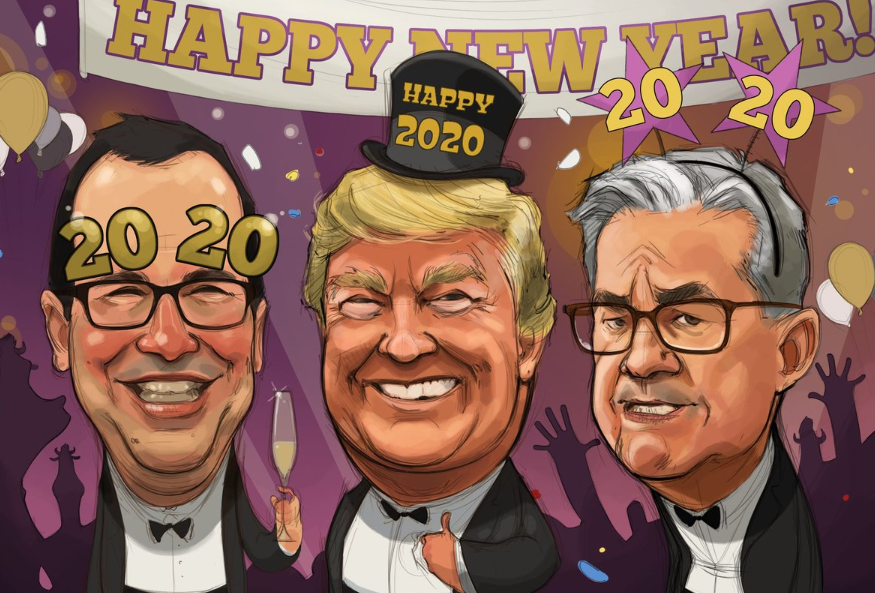 Like a Sunday morning chorus, global central banks, from the Federal Reserve to the Philippines had cut interest rates. In 2019, 67 central banks pursued an easing monetary policy (rate cut / lower reserve ratio / asset purchases) while only 17 pursued a tightening policy. Our macro view is that no G10 central bank would cut their benchmark interest rate throughout 2020. Well, probably save for the exception of Sweden’s Riksbank, the butterfly flapping its wings, which is kind of exciting because the rubber band looked like it was getting too loose.

Gold is back above $1,500 and seems to be having a bright, shiny road ahead of it. Going long on the bling would be a prudent trading strategy on one’s portfolio especially if one is considering buying stocks or indices. Gold loves the fact that the US Dollar Index has not been this low since the summer of 2019. And if 2020 ushers a global economic slowdown that runs out of fertile soils, together with the reflation theme then long gold would be a profitable trade. Gold has been on the rise despite bond yields grinding higher. Is there really inflation coming? Long gold will be the trade for Q1 2020. Still on flashy stuff, silver, is up more than 8 percent in the last two weeks!

As part of your Friday morning brief, the CAC 40 (a benchmark of French stock market index), closed 2019 with a gain of 26 percent, its best year since 1999! Oil prices held steady on the final trading day of the year, posting its biggest annual rise since 2016, US Oil (WTI) returned 36 percent in 2019! Our last macro calls for 2020 are, England Rugby winning the Six Nations after failing to clinch the Webb Ellis Cup and their football team winning the Euro 2020!

Get your ducks in a row on the open road, leading wherever you choose. The world before you, much unseen is there. Inhale great draughts of space, the east and the west are yours, and the north and the south are yours. You are larger and better than you thought, all on the open road, Happy New Year!